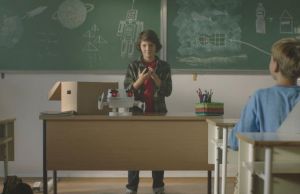 Directed by Yasmina Solanes and created by Saatchi and Saatchi Hungary, the charming film is now airing in Europe. Featuring a young boy as he tackles a school project to build a robot, we see him using his phone to message and Skype others to help him realise his dream.

The film is testament to Yasmina’s ability to capture thoughtful and natural performances from children and adults alike.