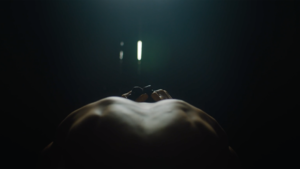 Fresh Film director Thomas Kelly has launched a new short film entitled ‘Animal’, produced through the Fresh team in Bangkok. What started as a relatively small idea while pitching for a commercial became much, much more as the project developed into a short.

The final film presents a portrait of a boxer and, more precisely, the story of a fight he will lose. The lead actor James Chaney is himself a boxer and the narrative focuses on the mental and physical preparation he goes through before a fight – and what happens after.

The Muay Thai boxing he practices is a particular martial art, sophisticated in staging and at the same time very brutal during the course of the fight. It’s visually violent, but the atmosphere surrounding the boxers is fascinating.

The film started as an idea Thomas had while pitching for an advert in Thailand. He researched the idea of creating a short film that involved boxing. During his search, he came across James Chaney on Facebook, fascinated by his story Thomas sought to cast him for the film.

From a small idea grew an ambitious project, that thanks to Fresh Bangkok pulling together immense resources it was shot in one day. The result is an intense, exhilarating and yet intimate film.

You can see the film in full here.

You can see more of Thomas’s work here.