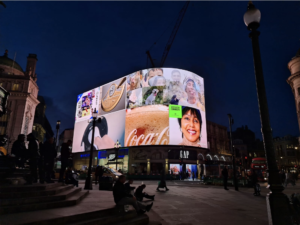 In support of Westminster Connects Volunteers and their selflessness towards their community in the pandemic, Harry George Hall creates a film to be shown on the iconic screens at Piccadilly Circus.

Fresh Film and Harry George Hall were approached by Tich to help celebrate the 3,000 volunteers who formed ‘Westminster Connects’ – the result of Westminster residents inundating the council to find out how they could help the community in response to the current pandemic.

The films will play at half past every hour for two weeks from 19 October on the iconic screens at Piccadilly, taking commercial space to thank those who went gave back and showed what Londoners can do in a time of crisis. And what better way to thank them than in a film projected on the largest screen in Europe at 783.5m2

The portraits were shot in a small portable studio at the distribution centre in Westminster, and working closely with Wiebke, creative director at Titch Harry also created a stop frame film using plates of the borough of Westminster which sit behind the portraits. Creating a film that celebrates the area and most importantly those who dedicated themselves to their community

Of the campaign Harry said: “During a number of sittings, I met some of the most selfless and inspiring Londoners that the capital has to offer, I can’t think of a more fitting home for these heroes than Europe’s largest screen at Piccadilly Circus..