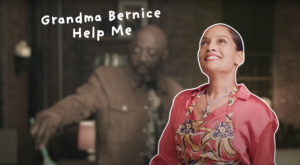 Kanyessa brought to the programme her polished documentary style and her ability to bring and show the connection between people on screen and the universal feelings that transcend the screen.