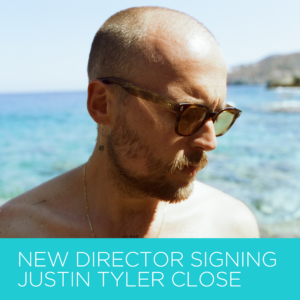 Director Justin Tyler Close brings his visionary artistic talents to Fresh Film. Justin’s work transcends boundaries leaping from commercials and documentaries to magazines and art.  He weaves cinematic stories on the humblest and grandest of scales, that are both intimate and loud, sensitive and exposing. His vast body of work is united by the desire to make the most beautiful, moving images possible.

Justin is represented by Fresh Film across the UK, USA and Asia. To view more of his work click here

Founding The Lab Magazine in 2010, launched Justin’s photography career, giving him the opportunity to work directly with brands such as Commes Des Garcons, Givenchy and talent such as Bryan Cranston, Lykke Li, Wes Anderson, Marina Abramovic and Willem Dafoe.  This led to Justindirecting commercials and being nominated for a Cannes Young Director’s Award. Since then he’s directed commercial spots for bands including: Mastercard, Chevrolet, Citibank, Nordstrom.

His latest short film Like Father Like Son, selected for a Nowness Pick, is a deeply personal and sensitive story that explores what it means to be a good father, raising good men, in a world where masculinity can be difficult to navigate.