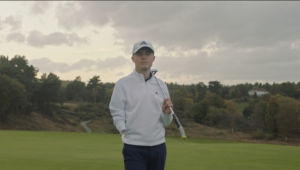 “I heard about George for the first time earlier this summer. His story, motivation and talent is beyond inspiring. It’s not just the way George has had to adapt his game physically that is eye-catching, it’s his attitude, his determination and his genuine passion to show others that they can do the same. George is one of those people that leaves you saying ‘wow’, a lot.”

With special thanks to Ultimate Fitness Cheshire and Delamere Golf Club.