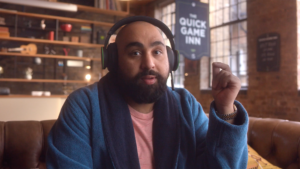 Jonnie Malachi brought his cheeky comedy to the latest Xbox commercial to highlight the way Xbox Series S brings your mates together for a swift one. Featuring the brilliant Asim Chaudrhy, he created The Quick Game Inn, Asim’s very own in-home dream pub complete with gaming consoles!

Agency Assembly and the Xbox team were excited to introduce comedy to their new campaign, as it’s something they hadn’t done in a while.  When the project started the lead wasn’t confirmed, but when BAFTA-winning actor and gamer Asim Chaudhry was locked-in, things got really exciting.  As he would be playing himself (not Chabuddy G) it was important to Asim that his dialogue was genuine to him, and as an incredible improv comedian, the scripts could become placeholders for him & his friends to play off, creating some great spontaneous performances, which combined with Jonnie’s approach to comedy made it a dream team.

Behind the scenes everything was much more locked down as the shoot involved filming on eight cameras simultaneously, in four rooms, across two buildings, with players communicating in real time via XBox Live – it was an extremely technical and ambitious project.

‘Asim was an incredible collaborator & muse – my brother potentially from the same mother. As I told him “…you’re basically me…just really successful…’’  So I drew a styling look for him that’s essentially me when I’m not working & he was bang up for it (see below).  Everyone stepped up to the plate to deliver four technically complex films in one day. Four sets had to be fully dressed & lit before we could start shooting, with 8 cameras running concurrently on the players. I was communicating with some of them only via XBox Live as they were in different rooms (or buildings in some cases). It was an intense (back) hair-raising proposition (neither Asim nor I have head hair)…but the results are pretty sweet…’